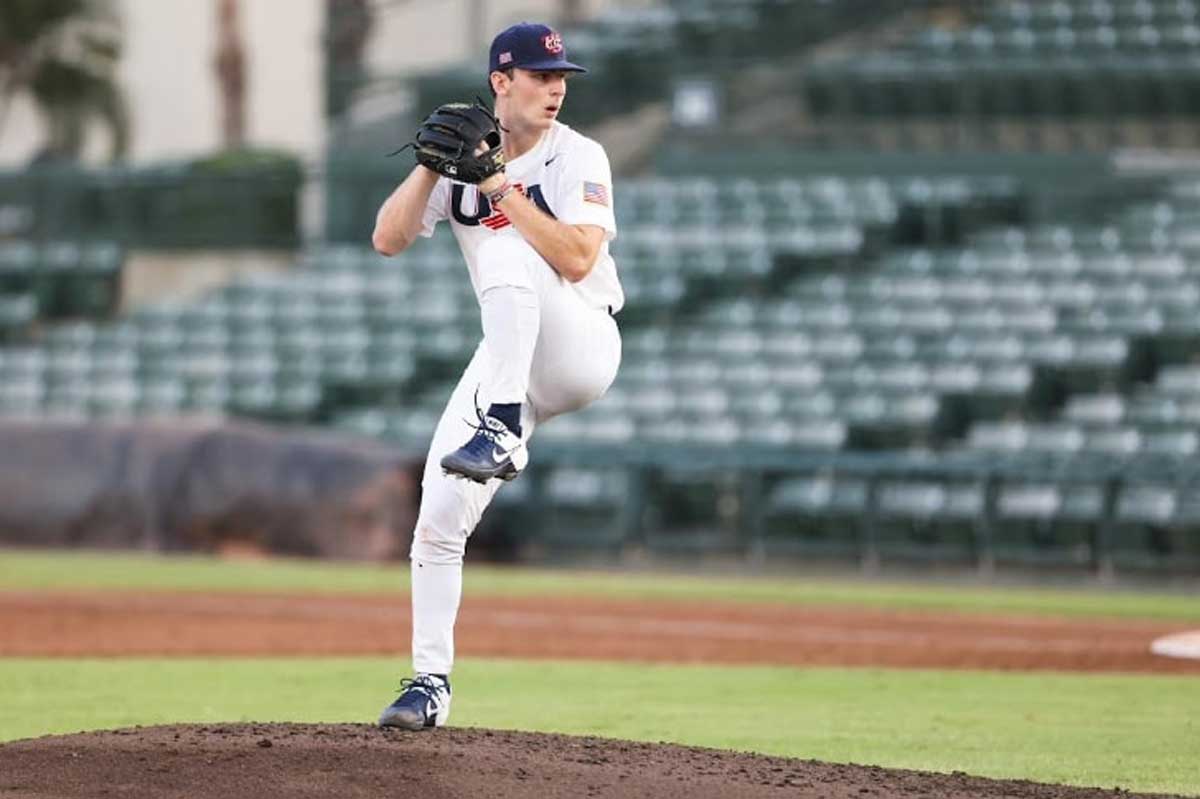 Andrew Dutkanych struck out all six batters he faced in the Perfect Game National Showcase in July. The outing caught the attention of professional scouts and was the start of a successful summer for the right-handed prep pitcher from Indianapolis.

Dutkanych’s performance on the showcase circuit against other highly talented prep players, along with his intangibles and potential on the mound, have caused scouts to consider him as a potential first-round pick in the 2022 MLB draft.

“It’s really weird, honestly,” said Dutkanych on the draft attention. “It feels weird to know that in eight months or so that I could be all on my own and playing professional baseball. All my friends right now are trying to figure out where they are going to college. But for me, I could be bypassing that or at Vanderbilt. It’s crazy to have so many opportunities in front of you.”

Dutkanych, a senior at Brebeuf Jesuit Preparatory School in Indianapolis, is a 6-foot-3, 205-pound right-handed pitcher who throws a four-seam fastball, slider, curveball and changeup from a high arm slot and athletic delivery.

He is a prototypical starting pitcher, possessing a repeatable delivery and a quality mix of pitches. His fastball hits 96 mph and features plenty of riding action. Due to that movement, his fastball plays better out of the zone, which is where it generates the most swings and misses. He typically throws his fastball high in the zone.

Dutkanych has two notable breaking pitches. His slider is a firm pitch that sits in the high-80s and draws comparisons to a cutter. His curveball features plenty of movement, resembling 12-to-6 action, and generates swings and misses.

In the offseason, Dutkanych wants to refine his changeup. Dutkanych didn’t throw a changeup during his junior high school baseball season and early on the summer showcase circuit. He added the pitch to his arsenal at the end of July between the Perfect Game All-American Classic and East Coast Pro Showcase.

“I have no real experience throwing a two-seamer,” Dutkanych said. “This offseason, I want to develop a two-seamer like Sonny Gray’s two-seam. I want it to move a lot horizontally. It will be a pitch that I can keep low in the zone since my (four-seam) fastball plays well above the zone.”

Besides his status as a top draft prospect, Dutkanych is a Vanderbilt University commit. Academics are extremely important to Dutkanych and caused him to focus on well-respected academic universities throughout the recruiting process. He considered Stanford, Duke, North Carolina, Wake Forest and Michigan before committing to Vanderbilt in 2019.

“I really wanted to go to an academic school,” Dutkanych said. “I always wanted to go to Vanderbilt. When I saw the campus, I knew this was the right place for me. My parents wanted me to see other schools. But I visiting Vanderbilt just confirmed my decision.”


Dan Zielinski III has covered the MLB draft for seven years. He has interviewed 356 of the top draft prospects in that period, including four No. 1 overall picks. Multiple publications, including Baseball America, USA Today, MLB.com and The Arizona Republic, have quoted his work, while he has appeared on radio stations as a “MLB draft expert.”