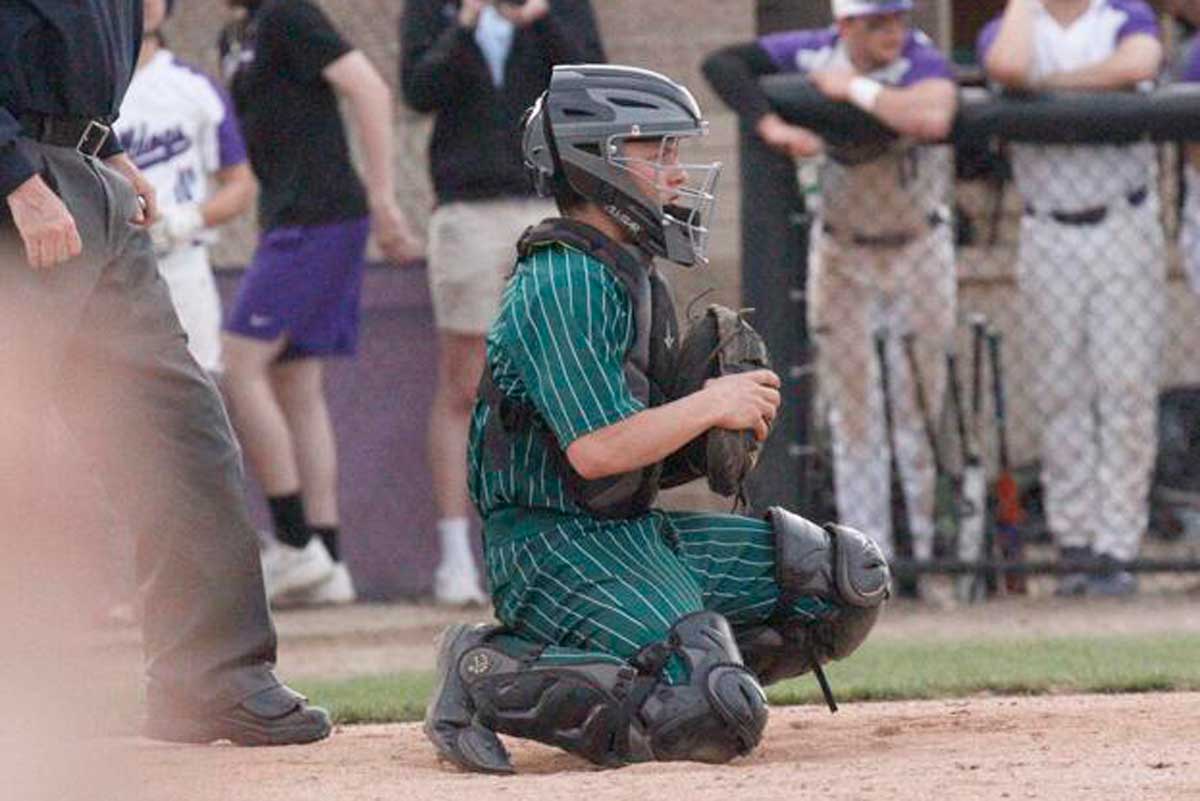 One of the strengths of the Zionsville baseball team this season has been their pitching staff.

The group has has a collective ERA of 1.88, with six pitchers who have pitched at least 10 innings with ERAs under 2 and a combined 300 strikeouts in 223 innings.

A big part of the that success has been junior Max Bond, who has caught close to 90% of those innings heading into Saturday’s semi-state against Penn.

“He’s done a phenomenal job,” Zionsville head coach Jered Moore said. “One thing that Max allows our pitchers to do is have confidence to throw one in the dirt, and that he’s going to block. He has been phenomenal with his pitch calling, blocking and throwing out runners.”

Bond handles nearly all the pitch calling for the Eagles as well, very rarely getting calls from the dugout.

Bond said that he “hates” when coaches call pitches from the dugout, because he doesn’t feel in control at the plate. But he has built in that trust with the coaches and pitchers, and it has been successful so far.

“It’s all about knowing your pitcher and how they are on that day,” Bond said. “It’s about knowing what the other team’s hitters are like and all that goes into it. It’s really about knowing how to best pitch each team we face as best we can.”

That relationship building started early in the off-season for Bond and his pitchers.

While he was a big part of last year’s team, hitting .268 as a sophomore, he was behind a phenomenal catcher in David Novak, so he only caught in five games last year.

Knowing he was going to be called upon more this season, Bond and his pitchers have worked a lot to build that chemistry.

“He’s been great,” senior Drew Dickson said. “Obviously we had David last year who was unbelievable, but Max and I have built a great chemistry. We went to work early this wither and he caught all of my bullpens. We have been building that chemistry over the last few months and he has been unreal in this tournament.”

Bond’s versatility and knowledge of who is on the mound has been a big advantage for the Eagles as well.

While all their pitchers are extremely talented, they all have different pitching styles.

Within a two-game conference series, or even within a game itself, there may be different pitch calls coming in. But time after time, Bond has made that adjustment.

“It’s great to throw to him,” senior Aidan Fitzsimmons said. “I feel like we can throw whatever he puts down and I feel comfortable it will be the right pitch. We know that if we have to bury a breaking ball, he is going to block it, and that is a big thing.”

Bond has had a knack behind the plate this season at throwing out base runners as well, and that has continued this post-season.

He has thrown out nearly half of would-be base stealers, and in the regional final on Saturday, he threw out a runner at second when the game was still in the balance at 2-1.

Dickson said as the Eagles have made a surge toward the end of the season, that is a big reason why.

“The way he has been throwing out base runners has been so much better as the year went on,” Dickson said. “Early in the year we were getting run on a lot, not just because of Max but because our pitchers were being slower to the plate. Over the last few weeks, he is just throwing everyone out.”

Bond has also been doing his part on the offensive side of things.

He is batting .368 over his last six games, and had the game-winning hits in the extra-inning sectional win over Noblesville and the regional final against Homestead.

“We needed that double (against Homestead),” Bond said. “It felt great to come through there because we really needed that. When you can get on top, the team’s confidence is up, the pressure’s down and we can just play relaxed.”

Bond has grown up in Zionsville and has seen success teams from the past come through.

He remembers watching the 2016 title game in Omaha while away for a travel tournament.

If he could be a key part of the next Zionsville team to make it to Victory Field, it would be a dream come true.

“It would mean the world to me,” Bond said. “That is what I have been dreaming of since I was a little kid. I have been practicing with the high school team since like sixth grade and we have always broken things down with ‘501’ and it’s been a tradition to try and get there. To do that would be the best feeling.”