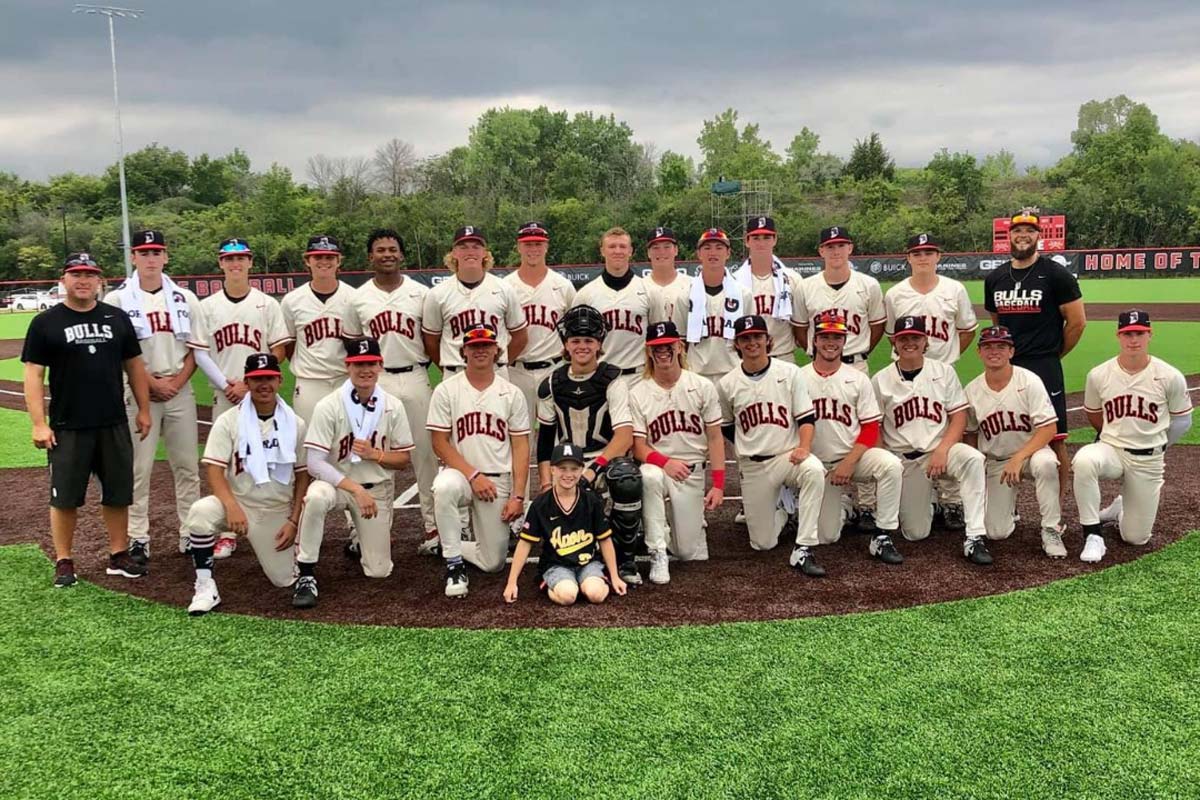 It was a thrilling weekend in Glendale, Wis., for the #BullsFam!

The GEICO Baseball City Series presented the Indiana Bulls an opportunity to face off against a trio of the best prep baseball programs from across the Midwest.

The Bulls bounced back from a hiccup against the Cangelosi (Chicago) Sparks in their opening game Thursday, Aug. 13, with three wins in a row. Back-to-back victories against the Wisconsin Hitters and St. Louis Gamers Friday, Aug. 14, set up a championship game rematch with the Sparks — with the game nationally televised on ESPNU.

Our boys were able to proudly hoist the championship trophy after an exciting 6-3 victory Saturday, Aug. 15, in the rematch against the Sparks.

“I can’t say enough good things about how this event was organized and executed,” Bulls coach Troy Drosche said. “It was a pleasure and an honor to have the Bulls organization included in such a tremendous event that showcases the best of the best in the Midwest. Being the champions of the inaugural GEICO City Series is an accomplishment our players are proud to bring back to Indiana.”

Andrew Wiggins doubled to drive home J.D. Rogers and score the Bulls’ lone run in the sixth inning, but the Sparks’ early lead was too large to overcome.

The Bulls jumped out to a 3-0 lead in the bottom of the second inning and, while the Hitters got to within one twice, another three-run frame in the sixth sealed the Bulls’ victory.

David Novak gave the Bulls a 4-2 lead in the fourth inning with an RBI single to score Mikey Jarek.

With a 4-3 lead in the sixth, Mathison drew a bases-loaded walk that scored Quentin Markel, and Tommy O’Conner smacked a single up the middle that drove home Novak and Wiggins.

Pitchers Anthony Costello (three innings pitched) and Ethan Bell (four innings) got it done for the Bulls from the mound, with Bell notching five strikeouts and the pair allowing just one walk each.

A four-run third inning for the Bulls broke open a close game and, after St. Louis got to within one, a four-run seventh clinched the Bulls a spot in the GEICO City Series championship game.

A Max Clark single scored Rodgers in the first inning. In the third, Mathison unloaded a bases-loaded triple that drove in Novak, Rogers and Harker to give the Bulls a lead they wouldn’t surrender.

The Gamers made it a 5-4 game by the fifth inning before the Bulls removed any doubt of the outcome in the top of the seventh. Novak singled to score Rogers and a double by O’Conner down the right field line drove in Novak and Mathison before O’Conner scored on a wild pitch.

Braxton Wilson started on the mound for the Bulls, throwing three solid innings allowing just two hits and one run with three strikeouts and only one walk. Conner Misch, Eli Clotfelter, Wiggins and Mathison came through in relief, with Wiggins and Mathison each striking out a pair of batters.

In front of a nationally televised ESPNU audience, a six-run outburst in the top of the third inning powered the Bulls to a 6-3 victory in the GEICO City Series championship game.

Singles by Waggoner and Harker led off the deciding frame. Waggoner went on to score on a passed ball and Rogers singled up the middle to score Harker. After a single by Clark, Novak reached base on a fielder’s choice play that wound up seeing Rogers score on a Sparks error.

Back-to-back RBI singles by Mathison and O’Conner drove in Clark and Novak, respectively, before Mathison capped the inning with a score on a wild pitch. The lead was more than enough to secure the championship, as the Sparks managed just a single run in the fourth and two more in the fifth inning.

On the mound, it was a total team effort for the Bulls. Andrew Dutkanych gave the Bulls two scoreless innings to start before Brandy Linkel added one. Nate Dohm and Cayden Gothrup added relief assistance before Bryce Martens got the Bulls out of a slight jam in the fifth and pitched a scoreless sixth. Martens struck out three before Harker added a pair of strikeouts as he closed out the win in the seventh.

It was amazing to see our boys and coaches represent the Indiana Bulls so strongly against premier competition.

“As a coach and former Bulls player, it was a proud moment to be able to watch these young men perform on national television and represent the entire program so well,” Bulls coach Sean Laird said. “We’re very appreciative of the opportunity and thankful we were asked to be a part of this awesome event. Hopefully we’ll be back here in the future. We had nothing but a first-class experience right from the start with GEICO, ESPN and all who helped make the event happen.”

Congratulations to the Indiana Bulls on earning the program its latest piece of championship hardware!