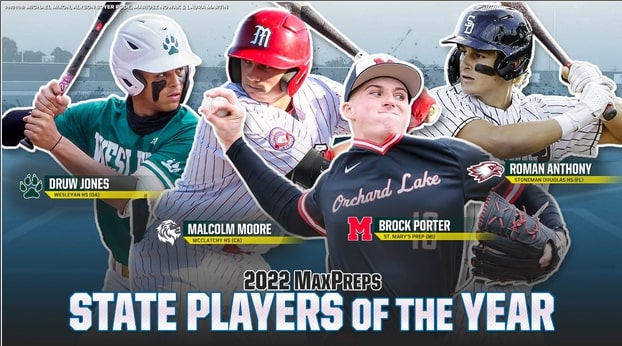 The 2022 baseball season recently finished with states returning to a normal schedule and postseason after a few years without due to COVID. Success on the field was a key factor in our selections for this year’s MaxPreps High School Baseball State Players of the Year.

Other factors in our selection process were local postseason honors, data submitted to MaxPreps and overall impact on the team.

MaxPreps selects the baseball player of the year in 48 states that play high school baseball, many of whom will hear their name called during the MLB Draft in July.

Alabama
Riley Wayne Quick, Hewitt-Trussville (Trussville)
The Class 7A state player of the year by the Alabama Sports Writers Association concluded his career by posting a 13-1 record with a 0.92 ERA. The Alabama-bound right-hander struck out 130 batters in 83.2 innings.

Alaska
Curtis Hebert, South Anchorage (Anchorage)
Hebert earned all-tournament honors for the second year in a row after leading South Anchorage to back-to-back state championships and 44 straight wins. He went 4-0 on the mound with a 0.00 ERA in 26 innings with 46 strikeouts and a no-hitter. At the plate, he batted .429 with 27 RBI, 22 runs and two home runs.

Arizona
Logan Saloman, Hamilton (Chandler)
The Class 6A defensive player of the year by conference coaches, Saloman went 11-0 with a 1.70 ERA and 52 strikeouts in 61.2 innings.

Arkansas
Gavin Alveti, Harding Academy (Searcy)
The two-way standout led Harding Academy to a Class 3A championship. He batted over .500 with 16 doubles and 38 RBI. He also had a 1.30 ERA in 58 innings with close to 100 strikeouts.

California
Malcolm Moore, McClatchy (Sacramento)
Moore led the Lions to one of their best seasons in decades with 29 wins. Ranked as the top catcher in the nation by Perfect Game, Moore batted .500 with a 1.117 slugging percentage. Headed to Stanford, Moore also had 49 runs, 51 RBI, 15 doubles and 13 home runs.

Colorado
Camden Ross, Broomfield
The heavy-hitting catcher led Broomfield to a Class 5A state championship and was named the state player of the year by CHSAANow.com. He batted .627 with a 1.204 slugging percentage with 49 RBI, nine doubles and 11 home runs.

Connecticut
Matt Scott, Joel Barlow (Redding)
Headed to Stanford, Scott was the state coaches association player of the year while posting a 10-0 record with a 0.32 ERA and 136 strikeouts in 66.1 innings.

Delaware
Evan Bouldin, Appoquinimink (West Middletown)
The state player of the year by the coaches association along with Tyler August of Delaware Military Academy, Bouldin went 7-1 on the mound with 42 strikeouts and a 1.39 ERA in 32.1 innings.

Florida
Roman Anthony, Stoneman Douglas (Parkland)
Regarded as one of the top outfield prospects heading into the MLB Draft, Anthony led the Eagles to a Class 7A state championship and a No. 2 national ranking in the MaxPreps Top 25. He batted .520 with 40 RBI, 14 doubles and 10 home runs.

Hawaii
Dylan Honda, Waiakea (Hilo)
Scoring Live chose Honda as its state player of the year. He led Waiakea to an undefeated season with 30 strikeouts in 25.2 innings. He also batted .400 and played in the outfield when not pitching.

Idaho
Merit Jones, Idaho Falls
The state player of the year by the Idaho Statesman, Jones batted .405 with 27 RBI and six home runs.m He also went 9-0 on the mound with a 1.26 ERA and 73 strikeouts in 55.2 innings.

Illinois
Owen Murphy, Riverside-Brookfield (Riverside)
An all-state pick by the coaches association, Murphy dominated on the mound and at the plate. The Notre Dame recruit had a 9-0 record with 137 strikeouts and a 0.12 ERA in 58.1 innings. He also batted .548 with a 1.288 slugging percentage with 15 doubles, four triples, 18 home runs, 75 RBI and 59 runs.

Indiana
Max Clark, Franklin Community (Franklin)
The two-time state player of the year is headed to Vanderbilt after batting .477 with a 1.126 slugging percentage. He scored 41 runs and had 32 RBI to go with eight doubles and nine home runs.

Kansas
Jackson Lovich, Blue Valley West (Stilwell)
Led Blue Valley West to the Class 6A state championship and was the state player of the year by the coaches association. He batted .430 with 34 RBI and seven home runs.

Louisiana
Gavin Guidry, Barbe (Lake Charles)
Played a major role on the Barbe teams that went 75-6 the past two seasons. As a senior he went 8-0 on the mound with 83 strikeouts and a 0.16 ERA in 45 innings. He also batted .422 with 25 RBI and five home runs.

Massachusetts
Evan Blanco, Austin Prep (Reading)
Blanco led undefeated Austin Prep to the Class 3 state championship, pitching a shutout in the semifinals. He was also named the conference pitcher of the year.

Michigan
Brock Porter, St. Mary’s Prep (Orchard Lake)
Expected to be selected in the first round of the MLB Draft in July, Porter concluded his pitching career with a no-hitter in the Division 1 semifinals against Forest Hills Northern. The Clemson recruit was 9-0 on the season with 115 strikeouts and a 0.37 ERA in 58.2 innings.

Minnesota
Kristofer Hokenson, St. Louis Park
The Star Tribune’s player of the year went 9-1 with a 1.02 ERA, and 157 strikeouts in 89.1 innings the past two seasons.

Mississippi
Nick Monistere, Northwest Rankin (Brandon)
The pitching and hitting leader for the Class 6A state champions, Monistere went 11-1 with a 1.53 ERA and 115 strikeouts in 73 innings. At the plate he batted .425 with 36 RBI, 12 doubles and eight home runs. He will play at Southern Miss.

Missouri
Karson Millbrandt, Liberty
Named to the Class 6 all-state team by the coaches association, Milbrandt went 7-1 with a 1.66 ERA. The Vanderbilt commit also struck out 91 batters in 50.2 innings and batted .400.

Nevada
Robby Snelling, McQueen (Reno)
The two-sport standout was one of the top football players in the state in the fall. He gets the nod in baseball after going 8-0 with a 0.56 ERA and a state record 145 strikeouts in 62.1 innings.

New Hampshire
Joe Allen, Winnacunnet (Hampton)
An all-state pick two years in a row, Allen struck out 71 batters in 43 innings with a 1.62 ERA and a 3-2 record.

New Jersey
Nazier Mule, Passaic County Tech (Wayne)
The two-way star figures to be one of the top New Jersey picks in next month’s MLB Draft. He batted .427 with 37 RBI, 33 runs and eight home runs (including three in one game). He also struck out 29 batters in 13 innings pitched and hit 100 mph on his fastball at the Perfect Game All-American Classic.

New Mexico
Nolan Perry, Carlsbad
The Cavemen won the Class 6A state championship behind the play of Perry, who went 8-1 on the mound with 98 strikeouts and a 0.26 ERA in 53.1 innings pitched. He also led the team in batting with a .465 average that included 30 RBI, six doubles, two triples and six home runs.

New York
Will Taylor, McQuaid Jesuit (Rochester)
The Section V Class AA player of the year led McQuaid Jesuit to a state championship. He went 6-1 with a 1.08 ERA and 70 strikeouts in 51.2 innings. He also had four home runs and 20 RBI at the plate.

North Carolina
Eli Jerzembeck, Providence (Charlotte)
In leading Providence to an undefeated season and a No. 3 rankings in the MaxPreps Top 25, Jerzembeck went 13-0 with 195 strikeouts and a 0.42 ERA in 87.1 innings.

North Dakota
Troy Berg, Dickinson
The Western Dakota Conference player of the year led Dickinson to a 23-3 record and batted .442.

Ohio
Brenden Garula, Mason
The Division 1 state player of the year by the coaches association led Mason to the state semifinals. He went 7-0 with a 1.26 ERA and 87 strikeouts in 50 innings. He also batted .383 with nine doubles, three home runs and 15 RBI.

Oklahoma
Jackson Holliday, Stillwater
The son of former MLB all-state Matt Holliday, Jackson set a national record with 89 base hits. He batted .685 with a 1.392 slugging percentage. The Oklahoma State commit also had 29 doubles, six triples and 17 home runs to go with 74 runs and 79 RBI.

Oregon
Ky Hoskinson, McMinnville
The Class 6A state player of the year, Hoskinson came within a passed ball of pitching back-to-back perfect games.

Rhode Island
Ben Brutti, South Kingstown (Wakefield)
The Rebels reached the Division 1 semifinals behind the pitching of Brutti. The South Florida commit posted a 7-1 record with 105 strikeouts and a 0.46 ERA in 46 innings.

South Carolina
Tristan Smith, Boiling Springs (Spartanburg)
The overall state player of the year by the coaches association, Smith went 6-1 with a 0.54 ERA and a 120 strikeouts in 51.2 innings. He also batted .337 with 28 RBI and 17 runs.

South Dakota
Ben Irsfeld, Roosevelt (Sioux Falls)
The Class A state player of the year by the coaches association, Irsfeld was 7-0 on the mound with 52 strikeouts in 34 innings pitched and a 0.62 ERA. He also batted .333 with 18 RBI.

Texas
Jett Williams, Rockwall-Heath (Rockwall)
After leading the Hawks to a state championship as a junior, Williams led them back to the state tournament as a senior. He batted .411 with 10 doubles, eight triples, seven home runs, 53 runs scored and 41 RBI.

Virginia
Seth Keller, Hanover (Mechanicsville)
Although teammate Levi Huesman was the higher-rated player by Perfect Game at the start of the season, Keller proved to be the team’s top all-around player. In leading Hanover to the Class 4 state championship and earning the Class 4 MVP award, Keller batted .554 with a 1.18 ERA. He had nine doubles, 10 home runs, 35 RBI and 38 runs at the plate. On the mound, he went 6-0 with 0.58 ERA and 75 strikeouts.

Washington
Ian Ritchie Jr., Bainbridge (Bainbridge Island)
Headed to UCLA, Ritchie is the No. 4 right-handed pitcher in the nation according to Perfect Game. He had a 7-0 record with 84 strikeouts and a 0.40 ERA in 39.1 innings. He also batted .468 with 12 doubles, four home runs and 35 RBI.

Wisconsin
Mitch Voit, Whitefish Bay
The Division 1 state player of the year by the coaches association, Voit batted .566 with 11 doubles, 37 RBI, five home runs and 25 stolen bases. The Michigan commit also went 11-0 on the mound with 87 strikeouts and a 0.54 ERA in 53.2 innings.