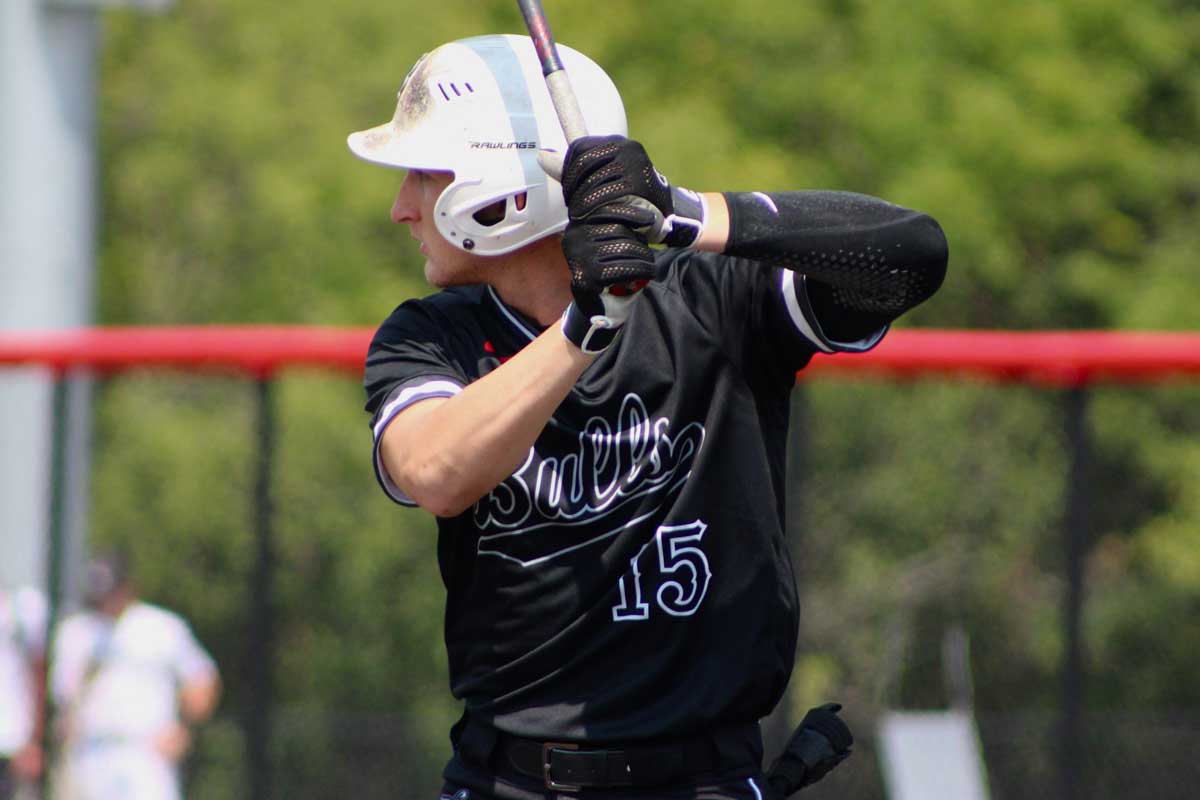 WESTFIELD, Ind. (BVM) — Keaton Mahan has long been looked at as one of the top baseball prospects in Indiana. And this year, he has been proving why he will be a valuable asset to the Ohio State baseball program in the future.

Mahan’s spring began with his first time suiting up for the Westfield Shamrocks. In his freshman year, Mahan competed at Delta High School where he was an all-conference player and also was named to the Delaware County first team.

Delta would end up losing in sectionals that season, and it wasn’t long before Mahan’s family moved to Westfield where his dad had earned a new job. Right away, Mahan was up for the challenge with his new team.

“Westfield just felt like the right play and the right home for me,” Mahan said. “Playing in a big city, I had to really prove myself and that I belong here and I was meant to be. I really enjoyed that aspect of it.” 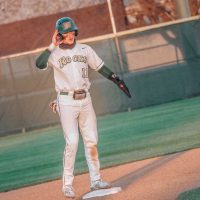 Keaton Mahan had his first chance to play for Westfield High School this past spring. (Photo: Madison Niehaus)

However, as Mahan planned to get his Westfield career started, his sophomore season was postponed and later canceled due to the COVID-19 pandemic.

“Getting my sophomore year canceled was devastating,” Mahan said. “We had a really high ceiling that year. We just had a lot of arms and a lot of bats that were going to be a big factor into making a state run. So being told that we weren’t going to have the chance to do that was hard on the whole team and made us come out my junior year with a chip on our shoulder.”

This past spring, Mahan finally had his chance at Westfield, leading the Shamrocks to a conference title. His high school team would again suffer a sectional-round loss. However, Mahan not only proved his talent, but also his leadership time and again throughout the year.

“My personal goals were just being able to prove that I belonged in this conference and just really succeed as a ball player on and off the field,” Mahan said. “I wanted to be more vocal and really try to become that leader before my senior year.”

Mahan continued to demonstrate both his skills and leadership throughout the summer while playing club baseball with the Indiana Bulls. Throughout his life, Mahan has played with numerous travel teams, including the Indiana Prospects and Indiana Nitro. During his 12U year with the Nitro, Mahan hit over 20 home runs, continuing to see his elite talent rise before his eyes.

While competing at this level has also helped his skills develop, Mahan is appreciative of the bonds he has formed through his travel career.

“It’s been super beneficial to travel the country and play,” he said. “You get to make connections and have friends from all over the country. You get to know your teammates a lot better and you create lifelong friendships.”

Last summer, one of the highlights for the Bulls’ program was winning the GEICO Baseball City Series championship over the Cangelosi Sparks. Although Mahan was competing in North Carolina at the time, it was a special win for the program that created excitement for this year’s tournament.

“It was awesome seeing the team represent the Indiana Bulls name,” Mahan said. “It was just awesome to see the smiles and them holding up the trophy at the end.

“This year, we came in and knew we were going to have a target on our back being the defending champions. We competed everyday as much as we could just to try to get back in the position where we could win in it.” 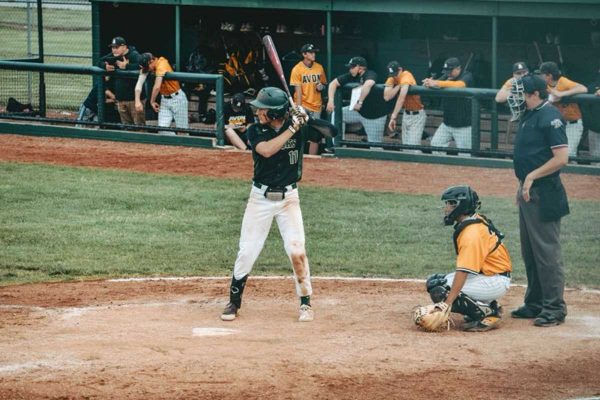 Keaton Mahan was a big part of the success for both the Westfield Shamrocks and the Indiana Bulls in 2021. (Photo: Madison Niehaus)

At this year’s GEICO Baseball City Series held in Milwaukee, the Bulls did not have the start they hoped for. In the opening game of pool play, Indiana suffered an 11-3 loss to the Virginia Canes despite three hits from Mahan.

However, just like they did last year, the Bulls would turn things around. In its second game of the tournament, the team got back in the win column with a close victory over the Louisiana Knights. Then came a Friday contest which was a rematch of last year’s title game against the Sparks.

In what was a tremendously close battle throughout, it was Mahan’s three hits and two runs that helped lead the Bulls to a 5-4 win, and a second consecutive championship game appearance.

“That weekend, we started out rough,” Mahan explained. “We came out the next day with a little more fire to come out and win against the Knights. Then we played the Sparks who we know quite well. I was batting leadoff and my job was to just get on base and get things rolling. Late in the game I had a leadoff triple; that was awesome to be able to get things rolling for our team.”

The Bulls would have a rematch opportunity with the Canes in the championship game, and this time, the results would be much closer. In a game that was nationally televised on ESPNU, the Bulls would get out to an early 3-1 lead. Before long though, the Canes tied things up.

Indiana took a 4-3 lead in the top half of the final inning, but the Canes again answered to tie in the bottom frame. In extra innings, it was Connor Rasmussen who came through with an RBI hit to lead the Canes to the title. Although heartbreaking the Bulls could not repeat, the experience was something Mahan will never forget.

“That was a great experience getting to play on TV because I’ve never done that,” Mahan said. “The game was back and forth and was a well-played baseball game. It was so much fun to be in that kind of game where it’s back and forth and you don’t know who is going to win. We did a lot of things right as a team and put everything out there that we could to put ourselves in the right position to win. We just came up short, but being in that environment and having that kind of experience was just unbelievable.”

Mahan will now take his experience into the fall as he begins playing with Team Indiana, coached by Scott French. Then it will be time for the 17-year-old to accomplish his goals in his senior season at Westfield.

“Personal goals will be to lead the conference in every offensive category,” Mahan noted. “I want to be an all-state player and make a push for Mr. Baseball.”

By this time next year, Mahan’s baseball career will have come full circle. Beginning at a very young age, the outfielder remembers his dad throwing baseballs to him in the yard. He also has fond memories of watching his brothers playing baseball as well.

Since then, one of Mahan’s older brothers, Chase, has served in the U.S. Army, which has inspired his younger brother both on and off the field.

“I just really respect my brother Chase,” Keaton said. “Not a lot of people have the guts to go into the military and to be willing to give up their life for their country. That really inspires me to do things that I love. He played baseball a lot and was always the one to go play catch with me or go hit balls with me.”

Through the years, Keaton has also developed another important bond in the sport with Chicago White Sox scouting director Mike Shirley.

“Mike Shirley has helped take my game to a whole new level which I didn’t think would be imaginable,” Keaton said. “He has taken me to limits that I would have never thought I would be able to get to. He knows so much about the game and teaches me a lot of things that I didn’t know. He’s gotten me in the right position and I like to consider him a second father who I can go to for anything.” 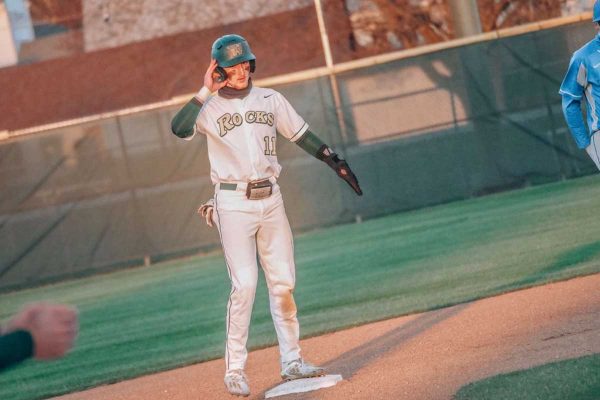 After his senior season at Westfield, Keaton Mahan will head off to play in college for the Ohio State Buckeyes. (Photo: Madison Niehaus)

Shirley is someone who has plenty of MLB experience, and Keaton hopes he can take the next step to that level someday soon.

“Hearing my name called would just be a dream come true,” Keaton noted. “It’s been a dream of mine since I was little and that would be super special. I just need to stay locked in and get one percent better everyday.”

But first, Keaton will have his time to shine for the Ohio State Buckeyes. With a lot of high-level schools such as Mississippi State interested in him during the recruiting process, it was Ohio State that ultimately stood above the rest.

“I started getting interest in my freshman year,” Keaton said. “I talked to Ohio State in the fall of my sophomore year. I went to a camp there and got to meet all the coaches. The guys were just awesome and I really just loved working with them. One thing that really caught my eye, is they build their program upon a brotherhood and just being there for one another and keeping everyone accountable. That was a big one for me.”

As he has at every level with each of his teams, Keaton is destined to shine at Ohio State. It may very well help him land a professional career someday, but for now, it’s one step at a time.

“I’m excited to get there and can’t wait to go meet all the other guys,” Keaton said. “I just want to learn some more knowledge about the game from the older guys. My goal is really to just go in there and be the best version of me that I can be and just go out and compete everyday. I just want to prove again that I can play at any level I’m put at.”