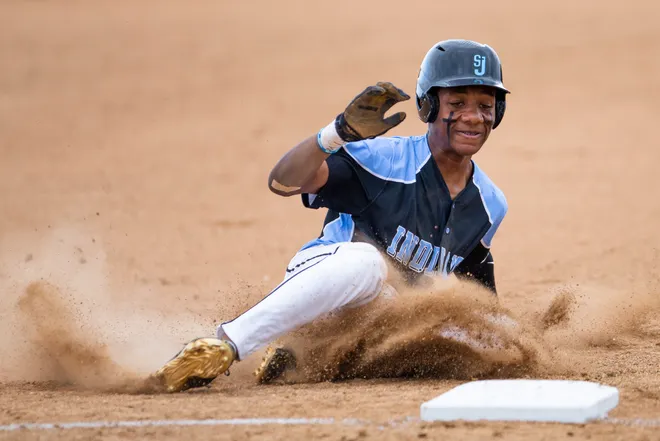 It’s opening game, a 3-2 loss to Plymouth, was evident because Lee didn’t play. He had to serve a one-game suspension from an ejection in last year’s regional loss to Hanover Central. And in one of Saint Joe’s recent games, Lee broke a 10th-inning 2-2 tie against Jimtown with a go-ahead hit, leading to a 7-2 win.

“Crunch-time situation and my team needed me to come through,” Lee said. “I live for those. It’s what you work for.”

In Saint Joe head coach John Smolinski’s eyes, Lee is the guy he wants up in any clutch situation.

Lee, a sophomore, is one of, if not, the most talented player on the Indians. An all-around player who is receiving major college interest, including from Notre Dame.

Midway through last season Lee, a center fielder, made the jump from junior varsity. He was a little nervous to join a team full of seniors. But in his first game, in a tournament against Lake Central, he made an acrobatic catch, affirming his arrival on the big stage.

“That was the play I needed to settle down,” Lee said.

And since then, he has taken off.

In 18 games last year, Lee batted .244 with 11 hits and three RBI. Smolinski buried him in the batting order to relieve some pressure of being a freshman varsity player.

This year, that is no longer the case. Lee is no batting third.

“His confidence is there,” Smolinski said. “He knows in that three-hole spot he is expected to produce.”

In 12 games this season, Lee is batting .412, already with 13 hits, 17 RBI and two home runs, one against South Bend Clay and a grand slam against Hammond Bishop Noll.

“It was big in my progression as a high school athlete,” Lee said. “It was big that I had to go through that growing year, going through struggles. Now I am seeing success.”

Smolinski views Lee as a true five-tool player. He can hit to all fields and hit for power. He is strong on the basepaths, already with 10 stolen bases this year.

Last year, Lee was Saint Joe’s defensive player of the year and continues to have a strong glove and throwing arm for the outfield.

That has led Smolinski to even try Lee on the mound.

So far, Lee has only pitched one inning this year, allowing one earned run in a loss to Lafayette Central Catholic. But by the time his high school career is over, he believes that will become an elite part of his skillset, too.
“It’s just another tool I can put in my toolbox as I go to the next level and play college baseball,” he said. “Having that asset in your toolbox is always good.”

For Mishawaka baseball coach John Huemmer, it is easy to pick out junior shortstop Maddux Yohe from a crowd.

In terms of baseball, Yohe goes about his work a little differently than other players on the Cavemen roster.

“His hustle and demeanor on the field. You just have to watch him,” Huemmer said. “Everything is 100%. There is nothing he cuts corners on because he knows if he wants to play at another level he has to push himself to be the best.”

Like many high school baseball players, Yohe has a dream of playing the sport at the next level. 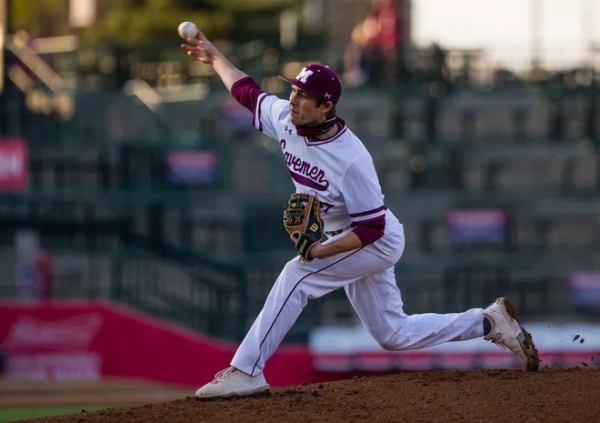 Standing at 6-foot-1, 170 pounds, Yohe’s intangibles don’t make him stand out. So he knows he has to work harder to get where he wants to go.

“Everything else you could work on but if you have the effort it could only help you out,” he said.

Effort is something Yohe said he’s always had on the diamond. He learned it from his time playing on Mishawaka’s basketball team.

“That’s what got me on the court,” Yohe said. “I just took that and put it into baseball.”

This year, Yohe has been Mishawaka’s leader in the infield, starting at shortstop. He gets things going with his bat, too, moving into the Cavemen’s leadoff spot this year.

“You watch how he does everything,” Huemmer said. “Sprinting, throwing, hitting, fielding and you are like this guys got it. He’s got the skills (to play college baseball).”

Some division one programs are noticing that, too. Along with a large group of NAIA programs, Yohe said he has also talked with coaches from Akron and Morehead State.

For Yohe, that is a good start. His dream school would be to play at University of North Carolina. With those school’s interest he believes he’s on the right track, so that effort isn’t slowing down anytime soon.

“It would mean a lot,” Yohe said. “I put a lot of work into this.”
Other top performances from this week’s baseball action